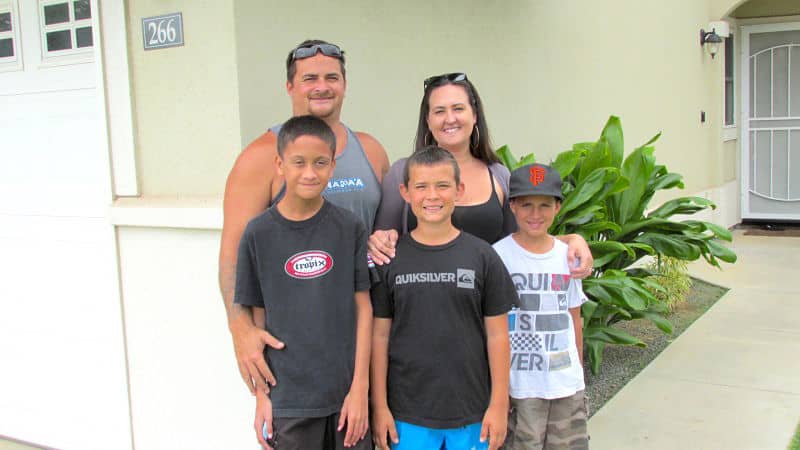 The Solomon family is all smiles with the Nā Hale O Maui affordable home they have lived in since October of 2014. The home was appraised at $530,000 and purchased by the Solomon’s for $325,000. In the front row (left to right) are 3 of their 4 children: Kahinau Solomon, Ramsey Hillen, and Kala Hillen. In the second row are Jason Solomon and his wife Sheena Solomon. Not shown is their daughter Shania Duarte-Solomon.

Jason and Sheena Solomon had a dream of owning their own home. Both have good jobs and one day, Sheena, who works in insurance saw the name “Nā Hale O Maui” as an additional insured on a home that a client was buying. Asking about the organization, and after attending a NHOM sponsored Homebuyer Seminar she and her husband decided that they were going to qualify for a NHOM affordable home no matter what it took.

Before buying the NHOM home the Solomon family had lived in a two bedroom apartment with six people and were paying $1,200 a month in rent, utilities were not included and their total monthly housing cost rose to $1,700.

For over three years the family worked to save the money for the down payment. Jason caught Octopus and fish. “Sometimes we had to sell fish,” said Jason with a touch of an apology in his voice. Sheena made home specialties and sold them as well. Finally after 42 months of hard work they had saved $11,000 for their down payment.

With a positive decision by the NHOM selection committee that makes its decision based on specific criteria using the NHOM Homebuyer Selection Policies & Procedures, and a contribution from NHOM’s Down Payment Assistance Program of $5,000,the Solomon’s were able to move into their home that had been purchased at auction by NHOM for $425,250 and then renovated at a cost of $45,869. There were closing costs of $1,804.00. The total cost to NHOM was $472,923. NHOM contributed a subsidy of $154,099 to buy down the price of the home. The home was appraised at $530,000 and sold to the Solomon’s for $325,000.

Their NHOM home is a two story 3-bedroom, 3-bath home in the Legends at Maui Lani with the potential to add one more bedroom. Their monthly payment is $1,700.

As the Solomon’s were enjoying their home, NHOM was turning over a new leaf at the beginning of spring. Cassandra Abdul, Nā Hale O Maui’s new executive director, has announced that NHOM has constructed their very first new home that will be affordable in perpetuity and will never be sold at market price.

“This was always our goal—the building of new homes affordable in perpetuity through use of a sustainable lease agreement that can be passed on to one’s heirs and takes the cost of land out of the pricing and still provides all the benefits of traditional home ownership, including the development of home equity,” said former Executive Director John Andersen, in a press release announcing the home’s completion.

“But the same recession that led to mortgage credit drying up and high unemployment rates made us turn to rehabilitating foreclosed homes that had been abandoned and were becoming neighborhood eyesores,” he said.

“Now we are back to our original business model and our first affordable in perpetuity new home is located on Kama Street in Waikapu. It is a 4 bedroom 2 and 1/2 bath home that has 1,600 Square Feet. of living area with an additional 350+ Square Feet when the garage and lanai are included,” Abdul added.

It is a pilot project for 12 NHOM land trust homes that are projected to be built in a residential project in Lahaina that is being developed by West Maui Land Company.NHOM plans to build affordable homes for families earning from80 percent to 120 percent of the area medium income.

Despite the worst recession since the Great Depression NHOM was able to place over 30 families in 3 and 4 bedroom affordable homes over the past few years. Most homes have sold for under $300,000 and many were sold in the mid to upper $200,000 price range.

Nā Hale O Maui is a Community Land Trust (CLT) and an independent 501 (c) (3) tax-exempt membership organization. The mission of the organization is to provide affordable housing for low and moderate-income residents of Maui one home at a time. The Institute for Community Economics developed the first CLT in the 1960’s. There are over 200 CLT’s operating in 38 states around the country.

Homes are kept affordable because the CLT acquires and retains ownership of the land and sells the homes to individual homeowners through long-term renewable ground leases. The terms of the ground lease give the CLT the right to repurchase the home located on its land with a resale price set by formula that is designed to give to give present homeowners a fair return on their investment, while giving future homebuyers fair access to housing at an affordable price.

“Our home has given us stability,” said Sheena Solomon. “It has been a blessing. We always strived to meet that goal of owning a home. To make it happen. The NHOM program made it happen.”

“The important thing to remember,” said Sheena, who is now a member of the NHOM Board of Directors, “is that we did not do this just for ourselves. We did it for our kids and our grandkids. This home will always be affordable for future generations as well.” 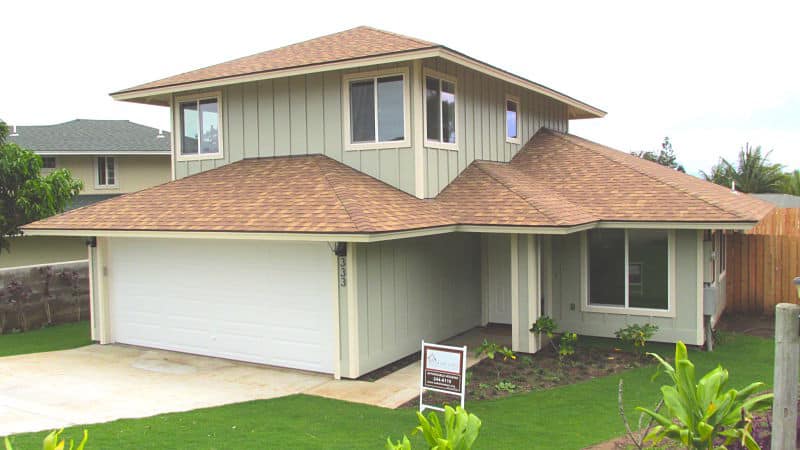 Nā Hale O Maui’s first home built to be affordable in perpetuity as a Community Land Trust Home is located on Kama Street in Waikapu. It is a 4-bedroom 2 and 1/2 bath home that has 1,600 Square Feet of living area with an additional 350+ Square Feet. when the garage and lanai are included. The home, on the open market would sell in the low $600,000’s. Itis expected to be sold by NHOM in the high $300,000’s. 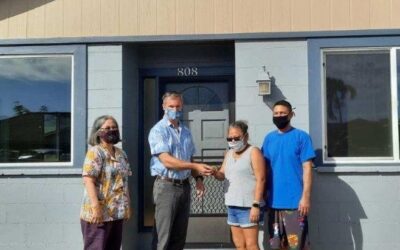 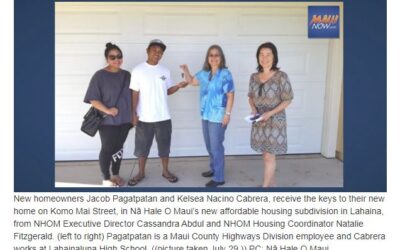 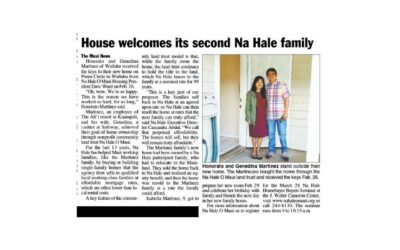